Viking Funeral? Yes We Can!

Posted on February 27, 2019 by Joe Pray under How to develop a memorial, How we can help you, Resources
4 Comments

“Send Me off in a Blaze of Glory”

People have often told me, “I just want a Viking Funeral, send me out to sea on a flaming ship.” That is a romantic idea, however, there is some doubt that Vikings really set their loved ones off to sea in a flaming ship.   Research on Viking funeral rituals show no evidence, neither archaeological nor written, to prove such seafaring funeral pyres were used. The burning ship at sea may be a figment of Hollywood imagination.  We do, however, have options for a Viking funeral today, but let’s first look at what the Vikings actually did for funeral rituals.

What were the Viking rituals?

Historical accounts and archaeological finds give us a good picture of the funeral traditions of the Vikings. Many did indeed involve a boat either real or symbolic.  Other practices involved cremation on a funeral pyre.

A stone ship on Gotland, Sweden. The so called “Tjelvar’s grave” was erected around 750 BC during the Nordic Bronze Age. Photo by dans le grand bleu

In Viking mythology, ships were used for safe passage into the afterlife just as a ship was used to travel in life.  That is why ships were prominent in Viking funeral rites.  For many Vikings a grave was dug in the shape of a ship and lined with stones.  The person was laid in this “stone ship” along with possessions such as tools of their trade and other items thought to be useful in the passage to the afterlife, or Valhalla.  At the conclusion of funeral rights they were covered over with more earth and stones to form a burial mound in the shape of a ships hull.  Large stones were used to outline the mound to create the image of a stone ship. 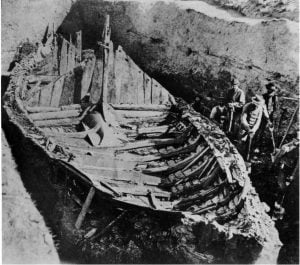 about the year 900 A.D. , a rich and powerful man died, and the Gokstad ship was used for his burial.

Higher ranking Vikings, such as chiefs and kings and queens, were buried in mounds containing a Viking longship for their journey into the afterlife. The longships would be filled with contents that may include sacrificed slaves, livestock, dogs, armor, weapons, tools and valuables. Some Viking ships even included wagons and horses to aid transport to Valhalla.

The Viking Funeral Pyre . The spirit ascended the smoke to Valhalla. Picture   See You In Valhalla, by Mateusz Katzig

Other funeral rites used the alternative of fire to burn the body on a funeral pyre, or a viking ship.  The funeral pyre was an important element  when the body wasn’t buried.  It was built to sustain temperatures hot enough for a period of several hours to complete the cremation of a deceased Viking.  Some sects of Vikings used cremation in their ceremonies because of their belief the smoke created by the fire was a path that the spirit of the person followed to Valhalla.

Regardless of how the body was disposed of, a few rituals remained constant.  The body of the deceased was often dressed in new clothes prepared specifically for the funeral.  Elaborate ceremonies built on Viking traditions used rituals to help the deceased travel to the afterlife.  Often the funeral festivities were held in Viking feasting halls where leaders would  make speeches, swear oaths of allegiance to the family and community, and exchange gifts…all while consuming lots of mead.

Fear of the Undead

One reason Vikings performed elaborate funeral rituals and placed goods in the graves was to please their Gods.   They believed a proper sendoff would not only aid their dead in their journey to the afterlife but it would also prevent death from spreading among their people.  Burying  a corpse incorrectly may displease the spirit of the dead person causing the spirit to return to haunt the family and take the lives of more family members.

Now what would I do for such a viking service today?

Well, setting a ship afire with a deceased person on a public lake would not be the way to go because 1) it is illegal, and 2) it would not efficiently cremate the person. Cremation requires a temperature of 1400 Degrees for a period of two to three hours to completely incinerate the average human body.   There are, however, a number of meaningful ideas that we have for a Viking funeral in today’s world.

Local cemetery rules, state laws and logistics of securing the necessary materials and space to perform these funeral options would pose a few obstacles for many families.   A professional funeral director or funeral creationeer will be able to work within these requirements on behalf of the family so they don’t have to worry about the details involved in creating  a wonderful Viking funeral.

An appropriate, meaningful, and healing ceremony could be arranged using numerous Viking-like artifacts, perhaps from the deceased’s own collections or those of fellow Viking enthusiasts.  The life celebration could be staged in a funeral home chapel decorated in the style of the ancient mead halls.  It could also be held outdoors in a park, garden or wooded setting.  A modern variation of one of the Viking disposition options would be an appropriate conclusion for the Viking funeral.

A key focal point could be using a replica Viking longship as the casket, either for burial or cremation.  Pray Funeral Home is fortunate that a friend of ours has become skilled at building replica longships.  We have plans to construct a replica longship with the dimensions to accommodate a deceased person while maintaining the ability to be used either for burial or cremation.  This would make it possible for the true Viking enthusiast or Viking descendant to have their own longship.

Burying someone in a replica Viking longship would also be possible.  A longship could be constructed as referenced above to hold a deceased person for burial in a cemetery.  With various modifications the replica ship may be able to fit within a burial vault which is required in most cemeteries.  Burial in a Green Cemetery may also be a possibility that may make it possible for the unmodified ship to be buried whole.

A second burial option would be burial in a longship shaped grave outlined by stones in the shape of a longship hull. The biggest challenge with these last two options would be complying with cemetery rules.  A green burial cemetery might also be the best option for stoneship burial

What will it cost?

The question of cost is difficult to answer.  The variations each come with a level of complexity that requires a custom approach for each option.   The main variations in cost for the burial options would be how much the cemetery space would require as two of the three options will require two to four spaces in most cemeteries.  The cost of a replica longship will depend on  the size, style, and seaworthiness.  It is all possible, it just depends on the level of expense the family is willing to consider to memorialize their Viking.

Pray Funeral Home can take care of the many details regardless of how a family chooses to celebrate a life.   With professional help a meaningful celebration can be created that helps family express their grief, and draw support from the community as they participate in the public gathering and funeral.  The funeral publicly affirms the value of that person’s life and shows how they will live on in others hearts and minds.  A meaningful funeral can also help bring about transcendence and transformation in the lives of those who attend.  As Dr. Alan D. Wolfelt writes, “funerals help us embrace the wonder of life and death and remind us to live deeply, with joy and love.”  That is why we strive to develop a meaningful service for each family.  We have witnessed how such meaningful services bring about healing for a family.

4 Responses to Viking Funeral? Yes We Can!